God is Real and it Wants us Dead: The Religious Terror of Bioware’s Biggest Games (originally posted at Polygon, 12/12/2014) 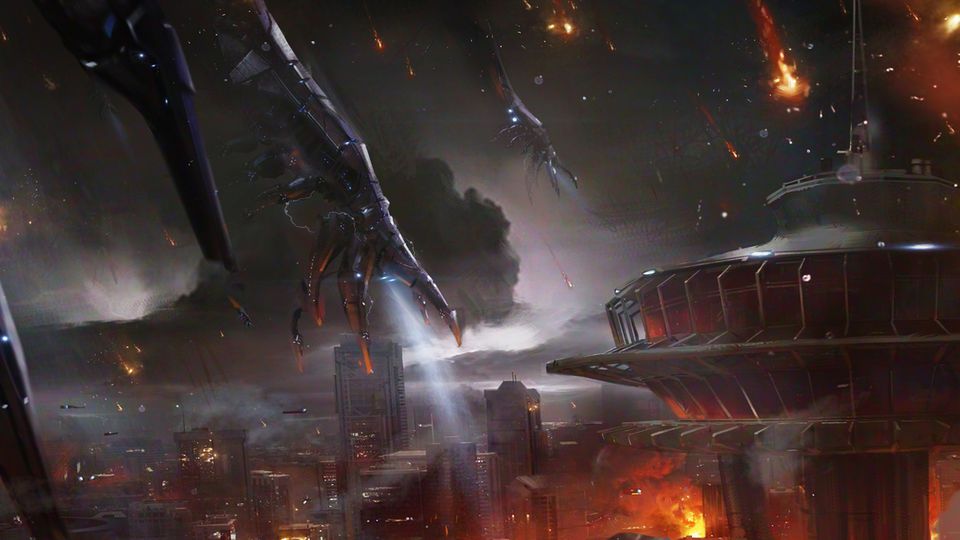 Games are often better at conveying horror than most other mediums, due to our direct and real-time responses.

This year, we’ve experienced the constant dread of Alien: Isolation and the grotesque physicality of The Evil Within. Overlooked, however, is the cosmic horror in BioWare games.

“We impose order on the chaos of organic life. You exist because we allow it, and you will end because we demand it.” These are the words of Sovereign, the first Reaper you encounter in Mass Effect. At this point, you discover that all life has been essentially created and guided by these godlike creatures. Now the Reapers are coming to end what they created.

The entire Mass Effect trilogy is preparing for war against beings who are more powerful than anything in existence because they, essentially, created existence.

Here, all of life is told their creator wishes it to end. This isn’t nihilism written in the stars, it’s death row on a cosmic scale as everything marches towards the gallows. To fight seems futile; as Harbinger puts it in Mass Effect 2, creation seems to be “dust struggling against cosmic winds.” The entirety of existence is little more than the ant farm for uncaring gods.

BioWare’s love of cosmic animosity toward creation found a new twist in Dragon Age as well.

END_OF_DOCUMENT_TOKEN_TO_BE_REPLACED

Oh hey there, you found my little bioware meta and critique blog, welcome!

Note: that the banhammer will swing liberally on those wandering in to derail and troll. I go by the mantra of do no harm, but take no shit.

I'm just another fan of Bioware games, mostly Dragon Age and Mass Effect. I wanted a space to critically examine these games, the themes, the characters, the world and all that entails. This will be a lot of pondering on things from my own POV as a US born, black queer woman who's put a lot of time and probably too much thought into these fictional folks.

I decided on this space rather than my tumblr because there's not a good way to have a discussion there about this subject.

There will also be linking to others meta ponderings, etc. A lot of other really awesome people have written great meta on these games, and their work deserves note and reading. So why reinvent the wheel?

Also, this is all subjective. There is no real objective way to critique anything because your own experiences inform your view and how you take the game(s) content.

Please note that if I ever link to your works, tumblr, etc and would like me to unlink, I'm happy to do so. Please drop a line in comments or to biowaremetacrit@gmail.com.

Thank you for dropping by!
T.D.

How to reach me

Awesome folks you should read

The random musings of a 1973 Original
Conditionally Accepted

a space for scholars on the margins of academia

Existential musings, art, fiction, and a blog. It's a hell of a thing.

Adventures in the world of mead-making

Video Games and the Bible

the space for all women & nonbinary gamers

An attempt to critique bioware games in a level headed manner

Someone who's critical of the white man's burden and hypermasculinity that surrounds gaming, tech and pop culture

For Well-Rounded Blerds and POC Nerds

Thinking, Ranting & Spiralling through the Dark

The Art and Craft of Blogging

The latest news on WordPress.com and the WordPress community.